The Geometry Module is in charge of simulating the spacecraft orbit and attitude, as well as the generation of the observation geometry of each instrument.

There are four different types of scenes:

The Geometry Module is in charge of simulating the spacecraft orbit and attitude, the instrument line-of-sight, the observation area and the auxiliary geometrical data to feed the Scene Generator, like the footprint size, orientation, and local incidence angle.

The Geometry Module, and the interaction between its Blocks, is shown in the following diagram: 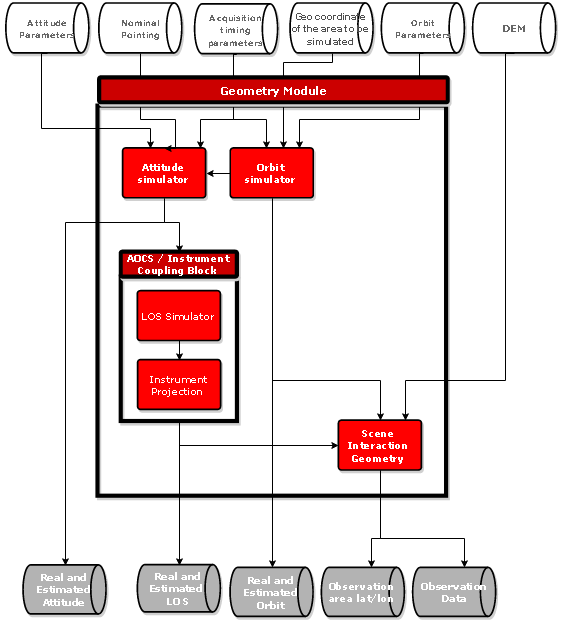 Tool: Tiff to NetCDF converter BIBLOS works with NetCDF format for the images. This is a tool to convert Tiff to NetCDF. It is external to BIBLOS, the user shall convert the image offline. THe package includes an executable, a README file (with instructions) and an example auxiliary file.

Biblos.Orbit In charge of the simulation of the nominal, real and estimated orbits. This block computes the nominal orbit from the input orbit parameters and disturbs this orbit with natural orbit perturbations. In addition, estimated orbit is calculated based on standard orbit determination methods.

Biblos.Attitude In charge of the simulation of the nominal, real and estimated platform attitude. This block computes the nominal attitude from the input mission configuration parameters and simulates the operation of attitude actuators, sensors and environmental torques.

Biblos.AOCSInstrumentCoupling This block is in charge of modelling the instrument LOS and detector projection coupling it with the platform AOCS and producing the final instrument viewing directions for image acquisition.Calculates the LOS (Line-Of-Sight) in instrument frame. The Instrument Projection calculates the LOS in ECEF frame. It is in charge of reproducing the scanning and pointing of the instrument LOS as function of time (cross-track, along-track, bidirectional, slowdown, limb…). In addition, this block couples the platform attitude with this scanning motion of the instrument.