The quality of the image is determined by the spatial, spectral and radiometric resolution.

On the other hand, for a high spectral resolution, the spatial resolution is decreased, the ground sampling distance is bigger so acquire enough energy. This is the case of spectrometers.

Radiometers have the highest radiometric resolution, the lower the spectral and spatial resolutions. In order to record enough energy, there needs to be a wider wavelength range and a bigger ground sampling distance (bigger instantaneous field of view).

Some types of instruments, like the Fourier Transform Spectrometers with imaging capabilities record a 3 dimension cube of data for each sampling time (ACT x ALT x wavelength). The processing of 3D instead of 2D information adds an additional layer of complexity to the simulator. The number of missions that have this type of processing is less than 5%. Therefore it is not taken into account in the BIBLOS design at this stage. The BIBLOS design assumes a 2D matrix of information per sampling time.

The simulation chain for the instrument converts the input radiant flux into the digital numbers recorded in a binary image, and adds errors at different stages. There are two simulation flows depending on the nature of the instrument:

The list of Blocks for the Instrument Module is the following

The simulation flow is the following: 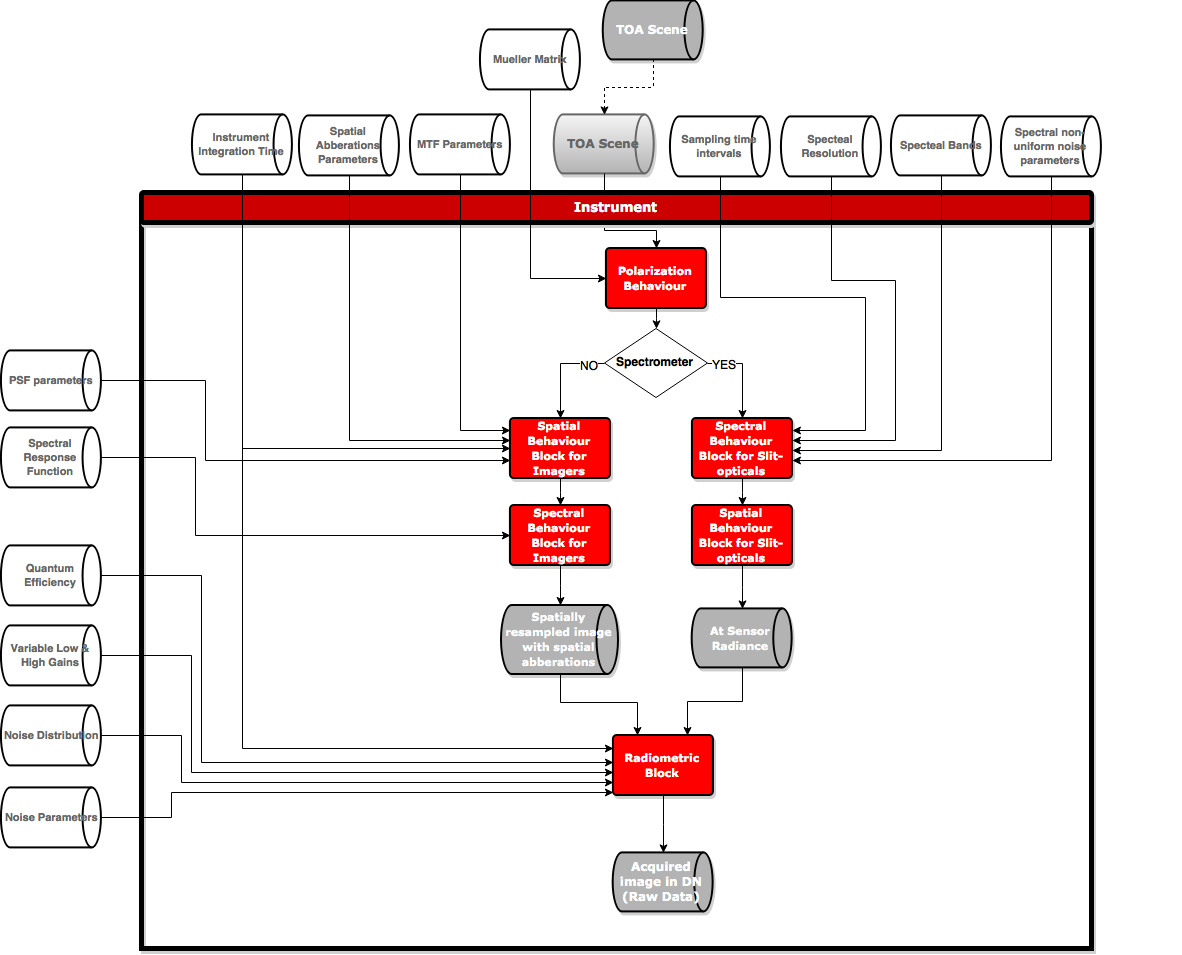 Biblos.Spatial The Spatial Block simulates the recorded pixel information when the TOA radiance arrives to the instrument detector elements. This Block is applicable to Imagers and Radiometers. Spectrometers will be modelled by the Spectral Behaviour .The Spatial Block performs the spatial resampling to the final ground sampling distance, taking into account the real instrument Modulation Transfer Function and spatial non-uniformity sources. The process is characterized by the convolution of the spectral surface information with filter functions along and across orbit representing the sensor specific Point Spread Functions (PSF). This needs to incorporate optical, detector, vibration and spacecraft motion characteristics.The Spatial Block simulates the spatial domain of the image, which is correlated with the instrument type (whiskbroom, pushbroom or frame). Pushbroom and frame instruments can be considered as particular types of whiskbroom instruments in which the acquisition of a group of pixels (line in pushbroom instruments or 2D array in frame instruments) is taken at the same time. In the optical phase, there are several errors to be taken into account. Some of them are:• High frequency vibrations or Jitter.• Pixelation• Smearing• Time Delay Integration• StraylightThe steps to process an image Block at the optical stage are:1. Convert Block Radiances at Instrument input to Irradiances on the Focal Plane.2. Perform a 2D Fourier Transform3. Multiply the image in Fourier domain by the two-dimensional MTF4. Perform the inverse Fourier Transform

Biblos.Radiometric The Radiometric Block models the transformation of the energy to the output digital number. It also models the errors that affect the radiometry of the instrument. The radiometric Block processing is divided into several steps :• Irradiance to photons conversionThe image in irradiance has to be converted to number of photons taking into account the photon energy of the band. The central wavelength of the band is used to convert irradiance to photons. • Photons to electrons conversionIdeally each photon reaching the detector element is converted in one electron. In practice however not all photons are converted to electrons. The Quantum Efficiency (QE) defines the conversion rate. This parameters varies with each spectral channel. • Electrons to Digital Numbers ConversionAt this stage, the image is in number of electrons with all detection effects already added. Though the electronics is complex, it can be modelled in three steps: Electrons to voltage conversion: It is the process of clocking out the electrons from the CCD detector elements, charge transmission and conversion into an analogue voltage.  Voltage Amplification: Amplification of the signal. Signal Digitalisation: Digitalisation to obtain digital counts.In addition, this Block adds electronic noise like quantization noise or dark current.The conversion between radiance and DN needs the following sensor parameters: integration time, quantum efficiency and variable high & low gains. The Radiometric Blocks includes the following radiometric noises:• Photonic noise• Photo response non-uniformity (PRNU)• Dark Current and Dark signal non-uniformity (DSNU)• Defective PixelsThe Radiometric Block may also include additional calculations for calibration.

Tool: Tiff to NetCDF converter BIBLOS works with NetCDF format for the images. This is a tool to convert Tiff to NetCDF. It is external to BIBLOS, the user shall convert the image offline. THe package includes an executable, a README file (with instructions) and an example auxiliary file.

Biblos.Instrument Instrument module. This is a module composed of the Biblos.Spatial and Biblos.Radiometric blocks.The Instrument Module is in charge of simulating the sensor behaviour. The sensors for the passive optical instrument measure the energy, the radiant flux that it receives. The main types of passive optical instruments are:• Multi-band spectrometers• Radiometers• Prism-grating spectrometers• Fourier transform spectrometers.The quality of the image is determined by the spatial, spectral and radiometric resolution.• Spatial resolution is the size of the ground sampling distance. This how big is the pixel projected on Earth due to the Instantaneous Field Of View (IFOV).• The spectral resolution is the size of the wavelength range of the energy recorded. The smaller the wavelength range, the better the spectral resolution.• The radiometric resolution is the number of energy levels that the instrument can distinguish. The radiometric resolution is dependent on the number of bits the sensor has available to store the information, so the number of radiometric levels is a power of two. A sensor with 4 has 2^4 levels, from 0-15. A sensor with 8 bits has 2^4 levels, from 0-255.