The Scene Generator Module is in charge of simulating the observed scene, the energy arriving to the instrument detector elements. The simulation chain of the Scene Generator Module starts from the geo/bio-physical variable that is the target of the mission (the soil moisture, the salinity of the oceans, the chlorophyll, etc.). The electromagnetic radiation has a different response depending on the terrain properties and the environment (atmosphere, clouds, etc.). To model this response a Radiative Transfer Model (RTM) is applied to the input geo/bio-physical map. The RTM calculates either the reflectance (the reflected energy at Top-Of-Canopy, the TOC image), or directly the Top-of-Atmosphere image (TOA), which includes the propagation of the electromagnetic radiation through the atmosphere. Clouds also have an impact on the propagation of the energy.

The composing Blocks of the Scene Generator are the following:

The simulation flow of the Scene Generator Module is shown in the diagram below: 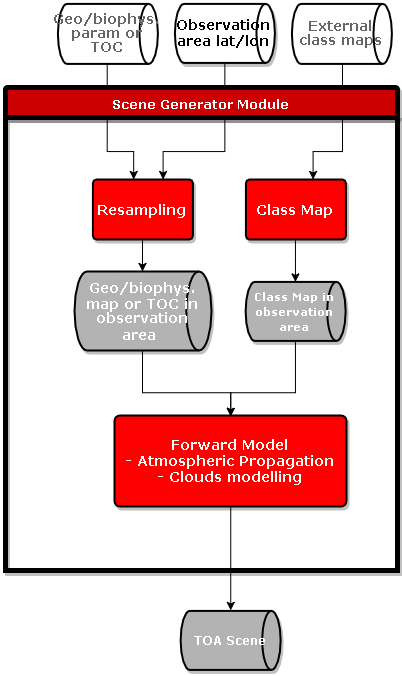 Biblos.Resampling The Resampling Block interpolates the input external image to the Scene Generator Module to the observation are as calculated by the Geometry Module. The external input image to this Block is either an image in Top-of-Canopy (TOC) reflectances or an image in the biophysical parameter. The output of the Block is the same (TOC or bio/geophysical parameter), resampled to the lat/lon grid defined in the geometry AOCS/Instrument coupling Block matrix. Input image should have a finer resolution than the observation area grid with already applied sampling factor. For each detector element, the Instrument Projection algorithm projects the pixel array onto the imaging area. The energy received depends on the Instantaneous Field Of View (IFOV) and pixel dimensions. In BIBLOS a constant nominal pixel size is considered. There is no attenuation considered due to pixel size. In the following equation, size_pixel is considered equal to size_ref.

Guide for LUT BIBLOS conducts atmosphere simulation calculations based on lookup tables. For that reason it is necessary to provide a set of most common used LUTs and an instructions how to use them. The package contains sheet with basic scenarios list and short guide how to use them.